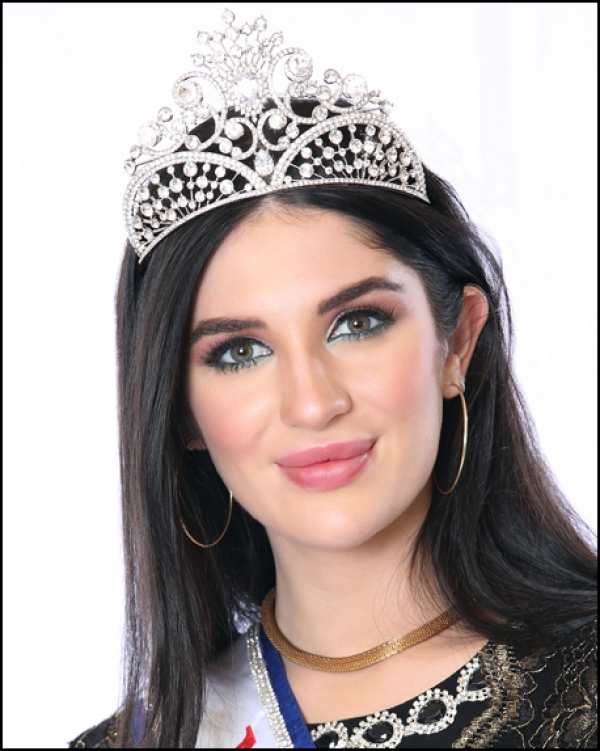 Iya Agha, 20 years old, US citizen of Iraqi origin, has been crowned Miss Arab USA on January 5th, 2019.
At only twenty years old, Iya is already making a difference in her world, through her education, her community involvement, and her family. She is at Barrett The Honors College, at ASU and has the ability graduate early this year, receiving a degree in both English Literature and Biological Sciences while also maintaining a spot on the Dean’s List. Iya is applying for Medical Schools and knows that she will be an incredible Physician soon.

Iya’s priorities always have been with her family and her culture. With two younger brothers, Iya has always strived to be a role model for them by teaching them the importance of family, love, and perseverance. Because of priorities instilled in her by her Arabic culture, Iya knows that in order to be successful, one must always be close to his or her family. Throughout her life, Iya has grown to know the unconditional love of both sides of her family and hopes to promote the importance of family during her reign.

Iya models with two different agencies, while also balancing school, research, philanthropy, and working at different medical institutions around Arizona. Iya has always known the importance of hard work after learning from her family. Her Iraqi Immigrant father worked from nothing to become a successful Physician. Her American Mother taught her that no matter where one starts out, they have the ability to succeed if they are driven enough.

Iya likes to think of herself as a woman of the world. Her mixed heritage makes her a perfect representation of what a Miss Arab USA should be. Growing up with a mixed heritage, Iya has always prioritized knowing both of her cultures. Iya has sought out her Iraqi culture through extensive college courses that allowed for her to grow her Arabic Language skills, while also teaching her more about her Arab culture.

Iya has always believed in pushing herself and prides herself in knowing that her year as Miss Arab USA will be no different. As an already active member of the community, Iya knows that this unique platform will only help. Iya is aware that her goals of educating people on how incredible the Arab culture is, to allow for any hatred that may surround the Arab community to dissipate, will not come easily. However, Iya’s community connections and public speaking skills will allow for her to work with people in the Arizona government, visit with people around the country, and promote love for the Arab world. Iya believes that the time is now for the children of this generation to grow up in a world in which that are given the opportunity to be educated on as many cultures, religions and people as possible. Iya knows that education is the first and most important step for understanding in our world.
Iya believes that one person and one voice can change the world. Iya will use the crown to be someone that little Arab girls can look up to and see the endless possibilities that they have. Iya already works extensively with charities around Arizona and knows that by being Miss Arab USA that she finally has the platform to support her Arab community. Iya will continue to be a voice for her Arab community and as always, she will strive to be better every single day. SUPPORT ME!